Following on from the popularity of The Wine Demystifier themed case ‘Wines of Spain’ last year, we will soon be releasing a wine club case featuring ‘Wines of Italy’.

Most people would readily name ‘Prosecco’ and ‘Chianti’  if asked to name Italian wines.  Others may perhaps name ‘Barolo’ or ‘Amarone’ and at a push ‘Brunello di Montalcino’ but its unlikely many more names would be forthcoming and therein lies the problem.

With 20 wine regions and incredibly more than 2000 native grape varieties (350 of which are authorised), Italy has a vast array of varieties which deserve to be discovered. I am deliberately avoiding Nebbiolo (‘Barolo’/’Barbaresco’ fame), Sangiovese (‘Chianti’), Glera (‘Prosecco’) and Corvina/Corvinone/Rondinella/Molinara (the grapes of Valpolicella and ‘Amarone’) because there are so many other grapes out there to explore – many of which you probably have never heard of – but are worth seeking out….hence the topic of this post!

Found predominantly in Piemonte in north-western Italy, this white grape is best known as the grape of ‘Gavi’ – its best iterations found as ‘Gavi di Gavi’ (literally Gavi from the town of Gavi). Wines tend to be very dry and high in acidity, often with a distinct steely minerality. Flavour-wise, look for limey citrus, apple and hints of greengage complemented by white flowers and green herbs. Some also have a touch of bitter almond on the finish. Top Producers include La Giustiniana and Broglia.

Found mainly in Umbria in Central Italy, the grape is at its best in ‘Sagrantino Montefalco’.  Sagrantino produces wines that are richly flavoured and tannic in equal measure – the presence of plenty of bright fruit (mainly brambles and cherry), smoky tobacco, black pepper spice and green herbal notes counter-balancing what is considered Italy’s most tannic variety (which is slightly scary given how tannic Nebbiolo can be!). Don’t be put off though, improvements in wine making have tamed these tannins and the grape is undergoing something of a rise in popularity.  The wines produced certainly aren’t shy but with the right food ie a hearty meat pasta, would be lovely.  Producer to try: Arnaldo Caprai

No, I’m not talking about the cheese, a grape really does have the same name! ‘Pecora’ means sheep and rumour has it the grape got its name because hungry sheep took a real liking to them and used to munch on them as they passed through the vineyards. Found predominantly in Abruzzo and Marche on Italy’s Adriatic coast, Pecorino produces wines with good acidity and often quite high alcohol (by virtue of the fact the grapes accumulate sugars easily). Flavour profiles run the gamut from orchard fruit (pear and apple) to herbal (thyme and sage) sometimes with a nuttiness so often present in Italian white wines. Producers to look for include Umani Ronchi and Cirelli

High in the alpine Trentino-Alto Adige, the northern-most region in Italy, whites dominate but there are several very interesting reds. Lagrein wines are quite deeply coloured, relatively low in tannin with black plum and sour cherry fruit and dark chocolate notes which provides richness. The high acidity providing freshness and lift. Despite the lack of tannin, the acidity ensures the wines are capable of ageing. Producers to try: Franz Haas and Tiefenbrunner

This grape was almost extinct until recently undergoing a revival in its fortunes. Found almost exclusively in the hills of Novello in Piemonte.  Semi-aromatic, it is stylistically quite similar to Sauvignon Blanc and Riesling – dry and relatively light bodied with decent levels of acidity.  Organoleptically, wines often exhibit grapefruit and lemon citrus notes combined with lifted florals and sometimes a touch of honey and green herbs. Today while it is possible to find single varietal expressions it’s often used as part of a blend.  A fabulous example I had recently is Luigi Baudana’s ‘Dragon’ Langhe Bianco. 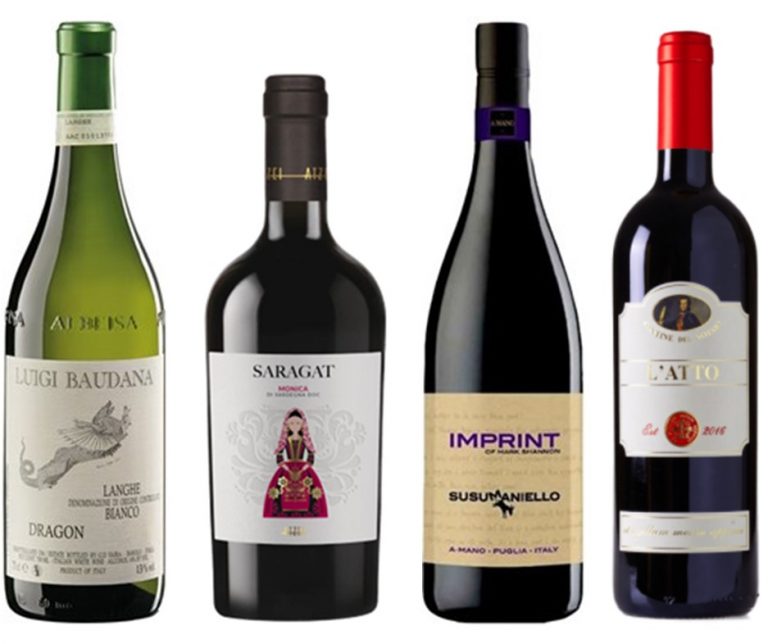 I guarantee you will not have heard of this grape!  I only discovered it recently at a tasting (when I was looking for something new to try) and was suitably impressed. Almost exclusively grown in Sardinia, this grape produces wines that are fresh and scented with red berry fruit and green herbs, sometimes with a spicy note. Gently tannic these wines often have a noticeable minerality too. So little of it is planted that it’s a hard wine to find in the UK, but the one I enjoyed was from Cantina Atzei

Considered to be one of Italy’s greatest white varieties. Its spiritual home is in the Veneto although it pops up in Friuli-Venezia Giulia and Umbria too. Best known for ‘Soave’. ‘Soave’ wines are dry with a steely minerality and notes of apple and lemony citrus complemented by dried hay and camomile florals. Quality really varies so I’d suggest looking for ‘Soave Classico’ wines for the best iterations that are also capable of ageing (with the wine developing a nutty, almond character). It also makes fabulously sweet Recioto wines. For me the best producer hands down is Pieropan – I love their wines.

One of Italy’s greatest grape varieties as well as being one of its oldest. Considered by many as the “Barolo of the South” although this relates more to quality and ageing ability rather than similarity between the grapes. Its heartland is  South Italy:  in Basilicata and Campania where best expressions can be found in ‘Aglianico del Vulture’ and ‘Taurasi’.  The wines produced are deeply coloured and tannic often with a pronounced minerality.  Fruit notes include ripe plum and sour cherry complemented by lifted rose florals, smoky tobacco, savoury leather and white pepper spice. Producers to try: Cantina del Notaio, Villa Matilde.

Found predominantly on the island of Sardinia (best expressions in ‘Vermentino di Gallura’), it is also grown in Liguria and Tuscany to a lesser extent.  Those that enjoy crisp wines with zesty acidity and like something with a bit more character than Pinot Grigio, this is the wine to try.  Aromantic notes of lime (there is often a hint of grapefruit pith too) alongside green apple and pineapple, with a touch of bitter almond and a distinct salinity that reflects the coastal location of the vineyards. Producers to try: Antonella Corda and (if you can afford it!) Capichera

This ancient vine is today among the worlds’ rarest grapes. Found in the deep south of Puglia (the heel of Italy’s boot), the name means ‘little donkey’ by virtue of the fact the high yielding vine carries a big ‘load’ of fruit. Wines are full bodied, high in alcohol, acidity and tannin and lots of spicy fruit (blackberry, plum) combined with both floral and herbal notes and hints of dark chocolate. Producer to try: A Mano

So, there you have it 10 grapes you may or may not have heard of (or at least realised they were behind some of the wines you loved!)  I will be looking to include wines from a number of these grapes in my upcoming case, so for those keen to experiment outside Italy’s most common grapes, keep an eye out for more details coming soon.

Battle of the Sauvignon Blancs!

“Z” is for Zinfandel