The chances are if you ask the everyday wine drinker what their favourite red wine is, you will get one of two responses:  Rioja or Shiraz.  Very few would volunteer that Syrah is their favourite wine, yet Shiraz and Syrah are in fact one and the same.

Many grapes have different names depending on where they are grown and originally Shiraz was the name coined by New World winemakers with Syrah (the grapes’ original name) used by the French – however, such has been the success of Australian Shiraz on the public consciousness that these days you will even see the term Shiraz used by some French winemakers (zut alors!!) Indeed for many years this noble grape would be found mainly in France’s Northern Rhone or in Australia where it was introduced in 1832 and quickly became the nations’ most planted variety.

Its spiritual home is the granitic soils of the Northern Rhone where the tricky climate and challenging topography help ensure production costs are high and yields low (hence the often premium prices!). Ironically however it would be the Australians who would capture wine drinkers imaginations with a fruit driven, higher alcohol, easy drinking and relatively cheap red they called “Shiraz” that would change the fortunes of the grape and catapult it into the hearts and minds of wine drinkers the world over.

Equally utilised as a varietal or as part of a blend, it’s also worth noting that the grape is often co-fermented with a white grape (Viognier) in many ACs of the Northern Rhone, a trend replicated by producers in Australia and beyond – many believing that this type of co-fermentation helps to fix colour and lift florality.

Ok, I sense I may be getting a bit technical here so I will move on, the main thing for you to note when you are perusing the wine shelves for your next bottle of wine is that as a general rule of thumb the name used on the label denotes more about the style of the wine than where it is from.

Where ‘Syrah’ is shown this suggests a more restrained, more mineral, savoury wines whereas ‘Shiraz’ is suggestive of a bigger, fruitier and higher alcohol wine….which leads me nicely to what the grape tastes of.

Noticeably dark (almost inky black) in colour, key characteristics of the grape include predominantly black fruits (plum, blackberry, blueberry) as well as oodles of black pepper spiciness, meaty/savoury notes (bacon, leather, olives) and sometime a touch of florality or herbiness all with a good tannic structure although a lot obviously depends on its age and whether/how much oak is used, and more importantly where it is from.

The profile above is more akin to Northern Rhone varietal wines, when you move to Australia, the Shiraz takes on richer chocolate/mocha notes, sweet spices (liquorice), ultra-ripe black fruits, sometimes a touch of eucalyptus, lower acidity, higher alcohol and riper tannins. Although it should be noted that within Australia, cooler regions delivering more restrained structured wines with a higher acidity and a peppery savouriness are increasingly being found (see below on key regions).

France:  As I mentioned earlier, originally mainly found in the Northern Rhone Valley (Cote Rotie, Saint Joseph, Hermitage, Cornas are a few ACs to look for – although many of these wines can be quite austere in youth), for more economical more approachable reds from the Northern Rhone then Crozes-Hermitage is a good bet (producer Chapoutier is always worth a punt) other quality producers to look for include Jaboulet and Guigal. 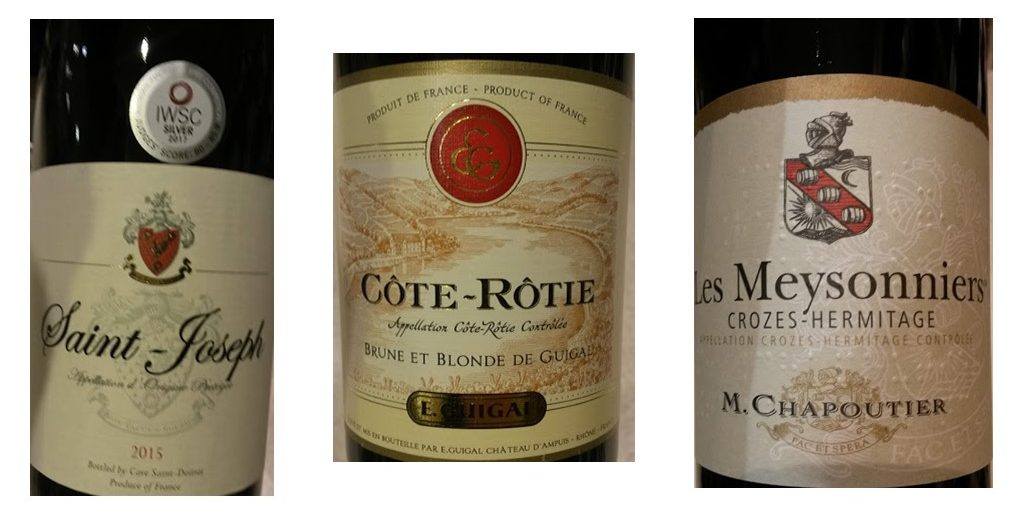 In the Southern Rhone the grape is utilised more as part of a multi grape blend (with Grenache and Mourvedre et al) and across Southern France where it is grown (both as varietal and blend) in huge quantities and can sometimes even be found as ‘Shiraz’!

Australia: Shiraz is Australia’s iconic grape – grown across all regions. The Barossa Valley is home to some of the oldest ungrafted bush vine Shiraz in the world and McClaren Vale is another premier region, but increasingly cooler climate areas (Yarra Valley, Mornington Peninsula) are being sought.

For names to look for (if you’ve got a few quid) then Henschke Hill of Grace or Penfold’s Grange….but to us mere mortals never likely to be able to afford these, fortunately there are lots of other options:  Clonakilla and Mount Langhi aren’t cheap but are well worth seeking out for special occasions, and wines from Peter Lehmann and Jim Barry are both good quality and reasonably priced.  A discussion on Australia and Shiraz would not be complete without a nod to the rather unique (and often much maligned) sparkling Shiraz – if the sweetness and tannins are in balance this can be a surprisingly lovely thing.

New Zealand: Interestingly, wines are usually labelled as Syrah in New Zealand – a nod towards their more restrained, cooler climate French style over the riper Aussie Shiraz.  Historically not one of the Kiwi’s most important varietals but this is beginning to change and there are some lovely Rhone-esque varietal wines coming out of Hawkes Bay’s Gimlett Gravels as well as from the multitude of microclimates on the stunning Waiheke Island.

Man O War is a fantastic producer from Waiheke, Te Mata, Trinity Hills and Vidal are great ones from Hawkes Bay, if you are pushing the boat out a little bit, Craggy Range is a terrific producer but for entry level you can’t go too far wrong with Villa Maria although I would tend towards their Cellar Selection wines in preference.

Chile: a relatively new varietal to Chile (1995) the grape has gone from strength to strength since then with the cooler northern regions around Elqui and San Antonio having the greatest success with Rhone-style peppery structured Syrah, although warmer regions make richer, riper wines. Matetic is a quality producer to look for and Errazuriz is a trusty name for more entry level wines.

South Africa:  Utilises both styles: restrained and peppery (cooler climate ie Elgin, Constantia) or rich and ripe (warmer climate ie Stellenbosch) and plantings are on the increase across all regions. Names to look for include Reyneke, Rustenberg and Boschendal. A personal favourite of mine is the Syrah dominated red blend: Chocolate Block.  **Note – I generally keep away from the First Cape and Kumala brands as I often find these to be generic and boring.

USA: Not historically a stronghold for the variety, there has been a growth in interest and planting as a result of the self-styled “Rhone Ranger” winemakers. The best examples tend to come from the cooler regions of California (Sonoma Coast and Central Coast) and the generally cooler Washington State region (ie Walla Walla Valley) is also showing a lot of success: Chateau Ste Michelle is a good name to look for here.

One final thought – don’t confuse the wine Petite Syrah with Syrah it’s not the same. (Petite Syrah is Durif which is a totally different grape!).

“Z” is for Zinfandel

“P” is for Picpoul de Pinet