Following on from a recent post on Chardonnay I thought it might be useful to do a quick overview of the classification system of Burgundy.

As I touched on previously, the French do have a rather unhelpful way of labelling by appellation as opposed to grape variety which can make things rather confusing if you are not familiar with them. As a rule of thumb a red Burgundy is Pinot Noir and a white Burgundy is Chardonnay with Gamay the grape of Beaujolais (but I won’t over-complicate with pesky things like ‘exceptions to the rule’ of which there are a few).

Ok before you panic, it’s actually a bit easier than you think to understand (in theory at least). I should point out here as well that I haven’t included Chablis and Beaujolais in this blog, whilst both are within the Burgundy region each has its own classification system, if anyone is desperate to know more, please just ask.

Right, onto the Pyramid – this will help… 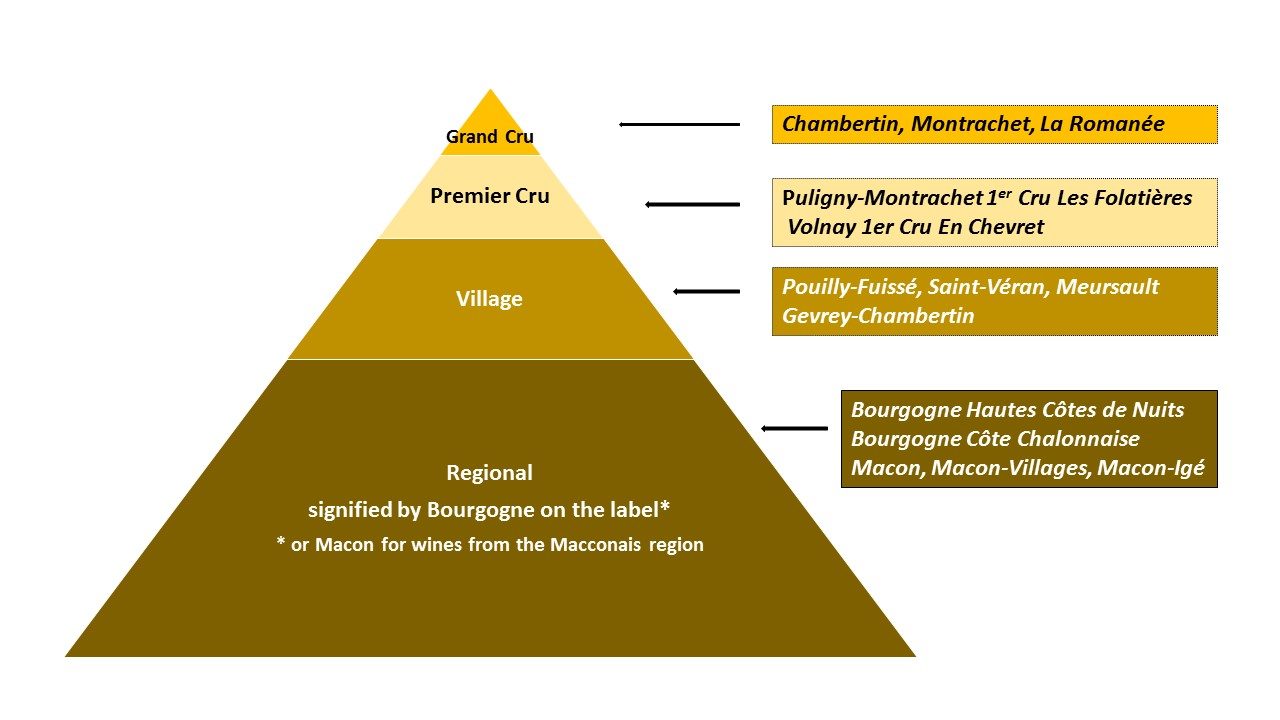 At the bottom of the Pyramid are the Regional wines – These are entry level Burgundy wines which don’t have the same constraints of production that wines qualifying for the higher status have. These wines make up over half of all bottles produced and are clearly recognised by the use of the term “Bourgogne” or “Macon” (if from the Mâconnais Region) on the label ie Bourgogne Rouge, Bourgogne Hautes-Cotes de Nuits, Bourgogne Cote Chalonnaise, Macon Villages. These may be the more entry level but this is not to say that value for money can’t be found here particularly around the Macon region where Macon + Village name ie Macon-Ige is a step up from basic regional wine.

A step up the ladder takes you to the Village Wines – also known as Appellation communale, these are from land which is deemed of less quality than that of the Grand or Premier Crus’ and the production rules also allows higher grape yields so quality isn’t considered to be as good, however they are a step up from the more basic regional wines. They account for around 35%+ of production and most come from several vineyards within a commune (village) the name of which is printed on the label ie Gevrey-Chambertin, although some can be single vineyard (and if not a Premier Cru site) the name will be noted on the label in smaller print after the commune name.

Next comes the two levels of single vineyard ACs: firstly the Premier Cru, then at the top of the Pyramid, the Grand Cru:

Premier Cru – these are the better quality wines within the Communal appellations and come from single vineyard sites.  Each commune containing Premier Cru vineyards has a separate AC for this classification*.  This group make up around 12% of the overall volume.  Whilst grapes grown in these vineyards follow the same production restrictions as the Grand Cru wines, the land is considered to have less potential than the historic Grand Cru sites.

*Main things to note: Each vineyard uses the village name followed by the specific vineyard plot (Climats) on the label, and will include the term: Appellation 1er cru contrôlée

Finally, at the top is the smallest segment of the pyramid, this is reserved for the top ranked domains, the Grand Crus, which make up a tiny (<2% of the total volume) amount of the overall production but are considered to be the best and have prices to match!  The easiest explanation is each individual Grand Cru vineyard site has its own AC, accordingly they only need the name of the vineyard on the label, Grand Cru designation and Appellation classification.

To complicate matters (as if it can get more complicated I can hear you say!) some villages chose to affix their name to the front of their best vineyards – which goes some way to explain why Burgundy appears to have so many hyphenated appellations.

An example is this: Gevrey (the village) affixed its name to Chambertin (vineyard) so whilst Gevrey Chambertin is a Communal (Village) appellation there are vineyards within this Commune that have their own ACs  (Grand Cru status) ie Chambertin, Charmes-Chambertin, Mazis-Chambertin as well as Premier Crus.

If all this is too much, I apologise and will leave you with probably the best bit of advice I can give:

Don’t panic when faced with a wall of names some single, some double-barrelled, look firstly for whether the words 1er or Grand Cru are shown, if not, these will be Regional or Village wines and if it’s Regional it will always show Bourgogne or Macon in the title. See labels below as a guide:

Also don’t always assume that a Grand Cru wine is automatically the best, quality varies and some Premier Cru vineyards particularly those close to the boundaries of the Grand Cru sites can be better (although can be equally expensively priced).  For value easy drinking whites the Macon Villages can be a good bet.

The true value of a bottle of wine!